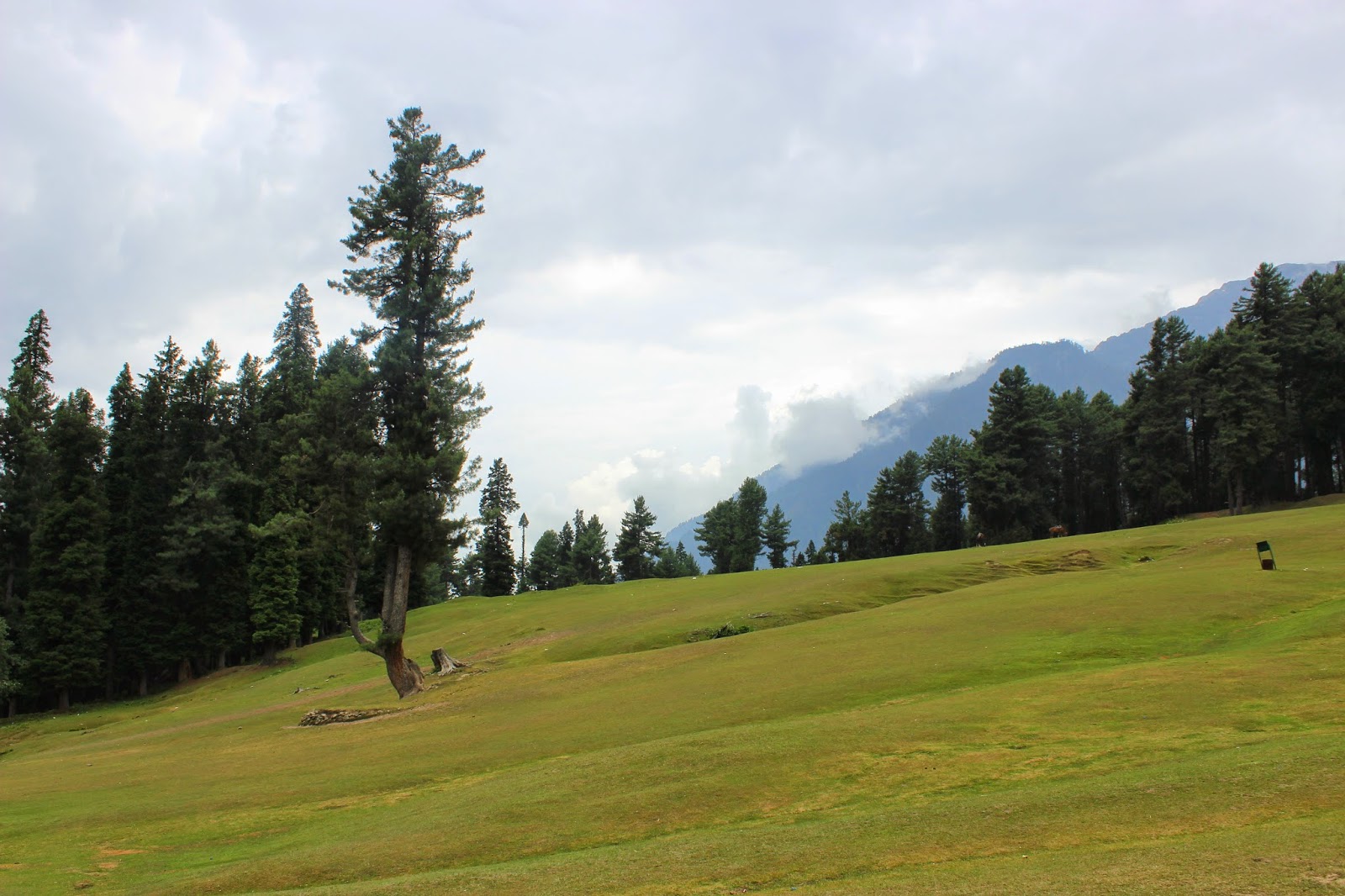 Pahalgam
Our second day in the valley begins with the drive to the grassland you see in the picture. We are up early the next morning and leave at 9 am since we are told by the driver that the Amarnath Yatris (Pilgrims travelling to the Amarnath Cave) cause major traffic snarls. We obediently listen to the cabbie and without a fuss carry all our luggage with us instead of dropping it at the homestay we are booked at.
All seems great at first. The drive is beautiful except now we seem to notice armed gunmen at intervals of five minutes! I've read about this in books by various journalists and people who've fled Kashmir during the turmoil in the 1990s, but I wasn't quite expecting them to be this close for comfort. Its still raining and as we moved further, the number of gunmen increase and they seem to have different uniforms as well. Our taxi is flagged down at various places and we are quizzed and asked about our whereabouts. The taxi driver on the other hand is asked no questions and is least bothered. After two such checks, I am intrigued and ask the driver how often do such things happen. He cooly explains saying when "You Indians come over to the valley, you need to be checked thoroughly, because we never know what you are up to!!" Hold on, did he just say "You Indians??" We are in our own country aren't we? Okay so lets face it, the local Kashmiris donot seem to be very happy with us comimg up here. I have never felt so unwanted in my own country as I did when the driver uttered those words.
We all fall silent in the cab and wish to not provoke the hot headed driver. So now we are about past the half way mark to Pahalgam and have been driving for close to 2 hours when we hit a major army check post. We are made to get off with all our luggage and belongings and walk towards scanners lined up ahead. The driver cooly asks us to get off and drives the car ahead to where we would alight after we are frisked thoroughly.  There are lady officers to frisk us and they speak amongst themselves in the local language and scorn at you if you ask them anything! Their frisking procedure is embarrassing and very uncomfortable. Meanwhile the Mister and I are summoned by an officer asking us to deposit our bottles of liquor at the counter. No rule anywhere states that we aren't allowed to carry alcohol with us. We mean to ask why but the officers pay no heed, they happily take away our sealed premium scotch bottles from us. No amount of requesting helped, infact they are so rude and brash that they ripped my suitcase apart to get the bottle out! And like most officers in uniform in our country, they have no regard and respect for a woman, they do not even acknowledge your presence forget looking you in the eye and talking to you! This was by far the most unsettling of experiences. We get all our stuff together and we get back to the taxi, only to find the driver in a scuffle with an urchin and another group of drivers!
Everyone's upset now, and we want to get to Pahalgam as soon as we can. There are no places you can stop on the way, no clean restrooms, restaurants, nothing whatsoever. We drive for another 45 minutes and get to Pahalgam.
We are greeted by dozens of horses, and their owners in a dirty, dung strewn parking lot. The car goes no further than this spot and to get to the actual grassland we have to get on to a pony. I am not to thrilled with the idea, but have no choice. Each pony costs 1500 Rupees each for a distance of 5 kilometers up the grassland. We are five of us and they get us up on each pony, promising to show us "3 points". We proceed in a line up the parking lot and then begins the climb. It has rained all night, the mud is sticky and the ponies look tired and over worked. I am not enjoying this at all. The saddles on them are hard and uncomfortable and there's nothing to hold on to. I make a noise and get off, not wanting to go ahead at all. As I walk back to the parking lot, the pony master comes running after me saying it was a pity I was missing the gorgeous view of "Mini Switzerland" after driving this far from Srinagar city. I give it a thought and did he just say "Switzerland?" and I'm missing it? Well fine them, I get back onto the pony and agree to give it a try. The first fifteen minutes is flat land so fine, we get by smoothly. Then begins the climb! Its steep as hell and slippery. There are dozens of ponies coming down the same way and I must admit, I saw not a single person relaxed and enjoying. I am stuck now and cannot go back, so I request the pony fellow to get me off and I climb the rest. We cross streams and rocky edges, it was terrifying. I have no pictures of sitting atop the horse or the way up because I was petrified and forgot to take pictures :(( Its drizzling all along and I'm feeling sorry for putting my In-Laws atop the ponies, how uncomfortable they must be...but wait, my Ma-in-Law was enjoying the most!! I have no idea how she got past this. We climb for another hour and are shown two silly places on the way - Valley Point - where you can see the parking lot you left below and Hunter's Point - a flat slab of cement where some Kashmiri Maharaja once hunted down a wild boar. 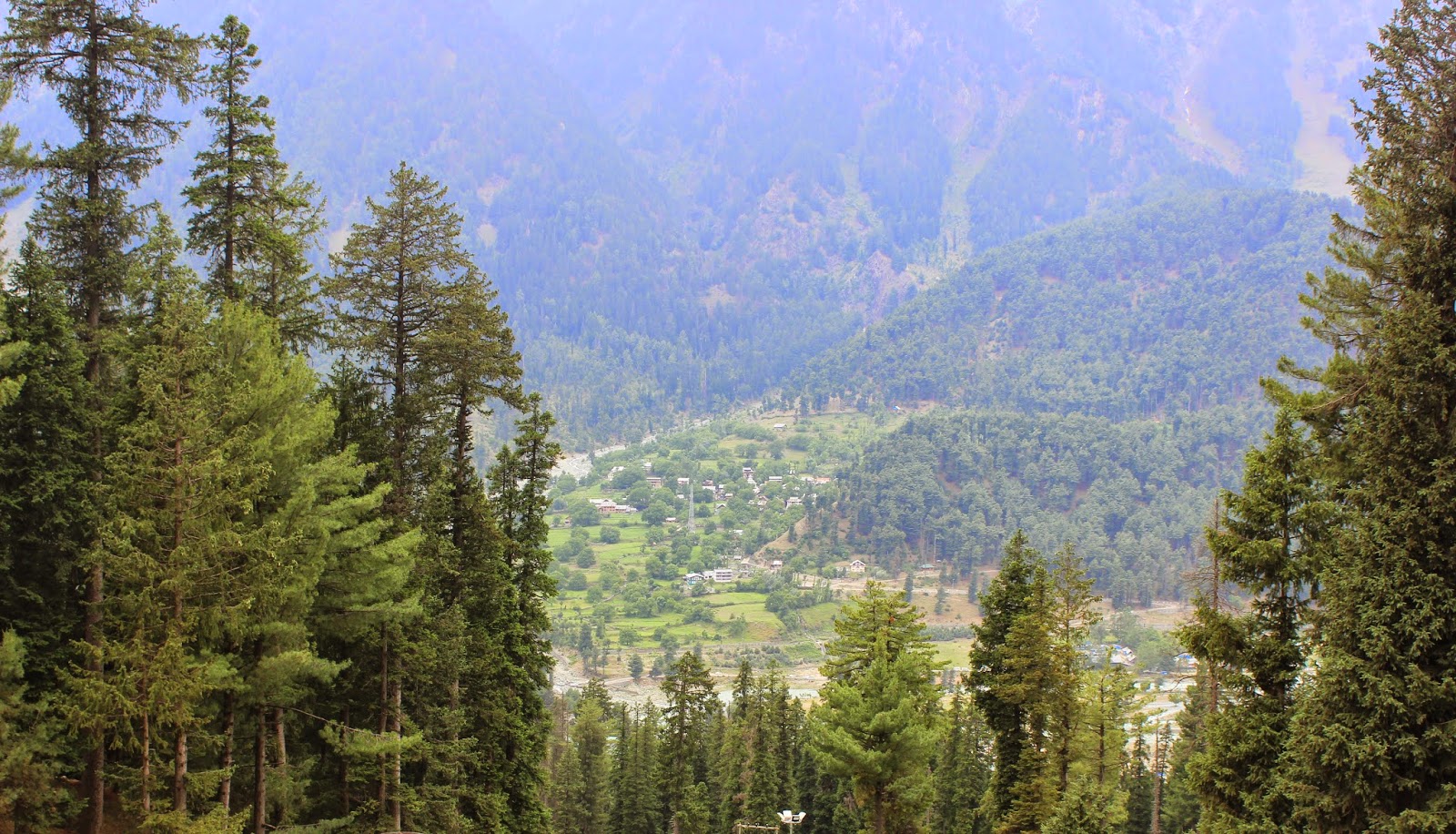 Valley Point
Okay that was all!! We get to the top where we are told, we've reached Mini Switzerland!! This place has four dirty shacks selling milky overcooked chai and maggi noodles!! I am soooo disappointed, my feet are sore, my backside bruised from the hard saddle and arms aching and all we get to do is eat noodles and a tiny grass patch, they're calling Switzerland??? 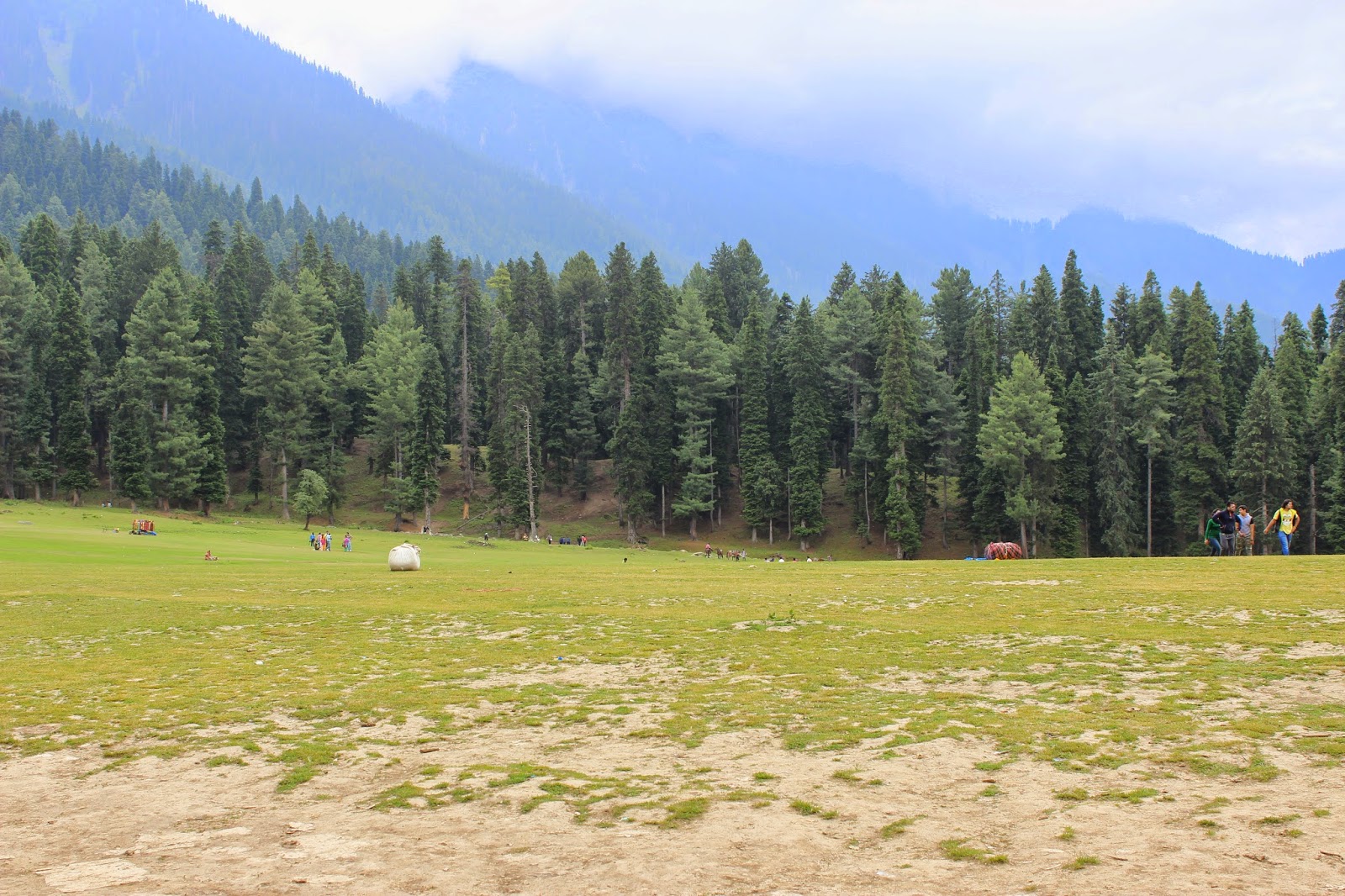 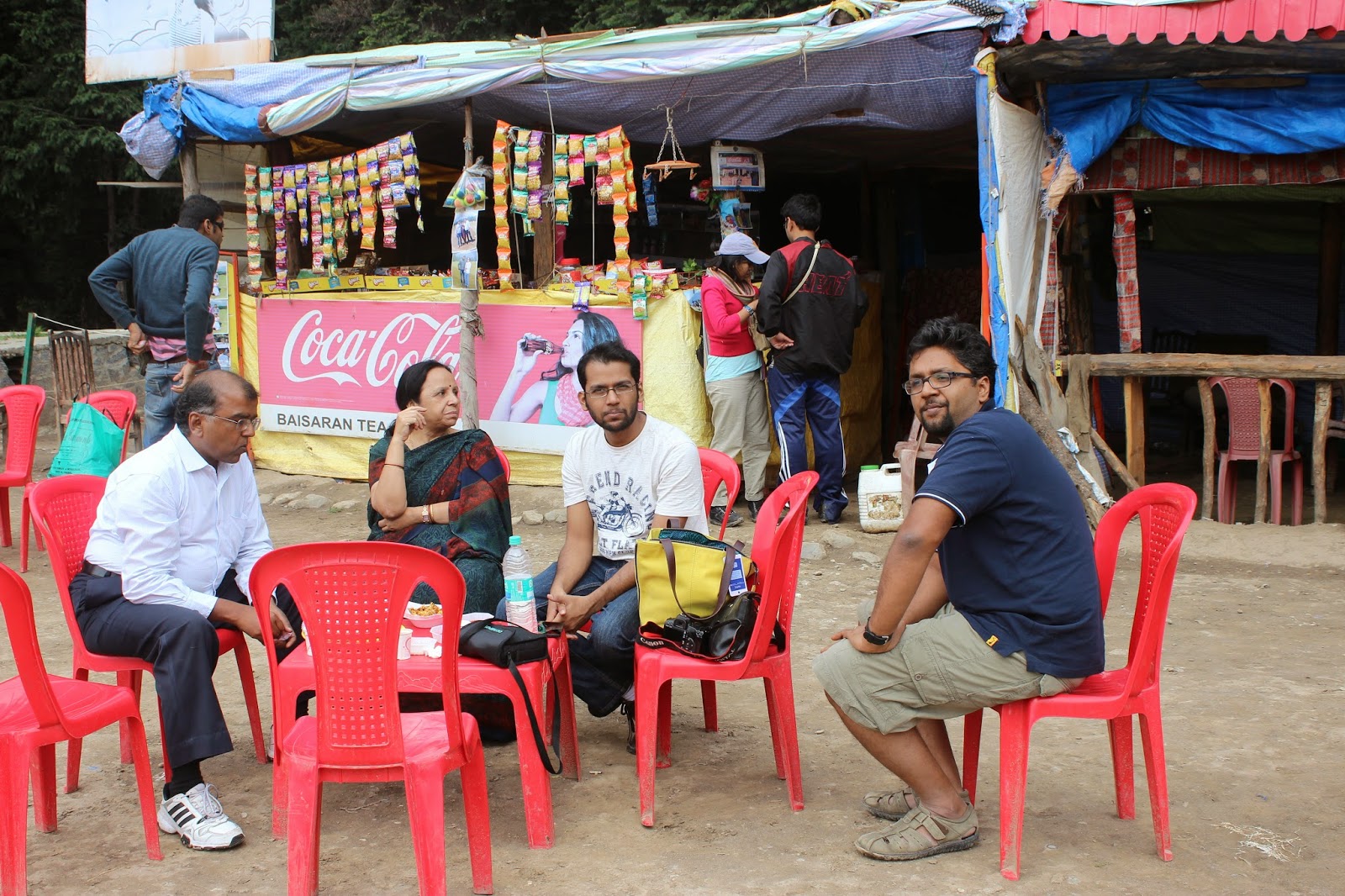 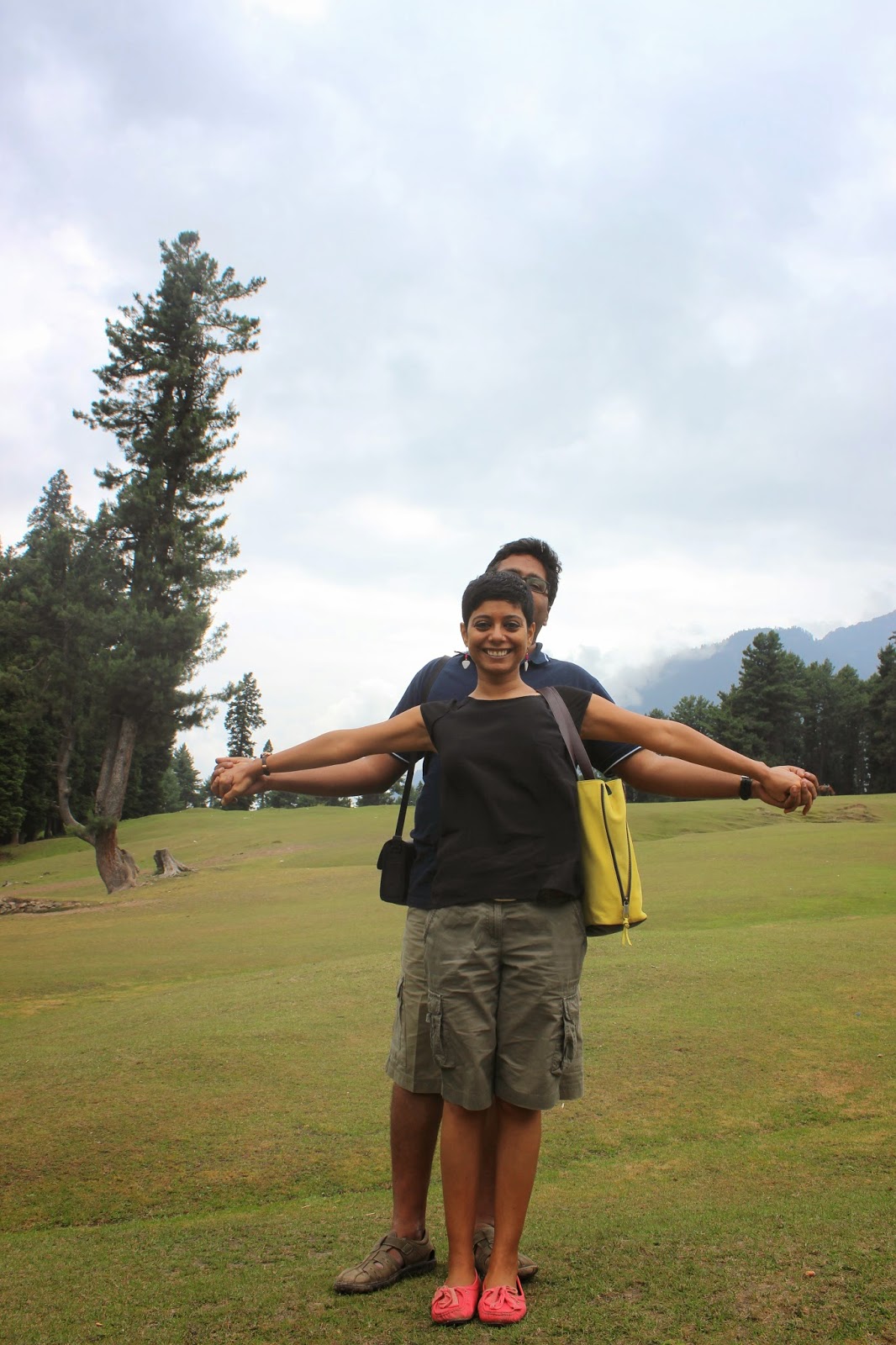 The Mister and I :))
We spend some time trying to snap some pictures and we head back in half an hour's time because the pony guys must get back to base. This time the Mister and I both make it back down on foot. It takes us an hour to get to the parking lot and now its pouring crazy. There's no place whatsoever to take cover and we frantically try calling the driver. Bad idea, because the phones have no metwork! We bump into the driver who's being beaten up by other drivers for the scuffle he had this morning. Gosh! I was in tears, now we were eager to get back to the city at the earliest. Oh and I must add, there are NO restrooms!!
Its 4 pm when we begin to drive back to the city. We cross buses and cars stuffed with Amarnath Yatris, who get off and urinate and litter just about anywhere.
We insist on stopping for lunch and the driver halts at a restaurant. Its strange how we never enjoyed the food anywhere. Good Kashmiri food is hard to come by and yellow lentils and kidney bean curry (Rajma) was all we found to eat.
We finally reach the Mount View Villa at 7 in the evening and it was like coming home after exile :)) Its pouring and we are greeted by warm staff and hot cups of chai, what a relief!!
Day 3 in my next post! Hope you're enjoying the detailed series :))
Thanks so much for reading!